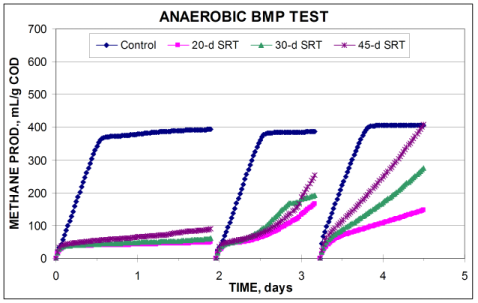 Anaerobic biodegradation tests – often referred to as Biochemical Methane Production (BMP) tests – involve addition of known amounts of a chemical or wastewater to anaerobic cultures. The quantity of methane production – relative to that from a control – indicates the biodegradation potential.

This case study shows methane production for a Control reactor and three test reactors that were operated at 20-, 30- and 45-day retention times and received three doses of industrial wastewater. The tests indicate that culture acclimation was required and incomplete methane production occurred for the lower SRT reactors.

Pulse-Flow respirometers can be used to assess biomass activity for aerobic and anaerobic reactions. In aerobic tests, cultures are combined with nutrients, trace minerals, and an organic substrate – such as acetic acid or ethanol. The maximum oxygen uptake rate reflects the amount of active biomass in the test culture. Examples are shown below: 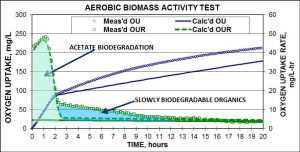 ​In the case illustrated here, an aerobic culture having a VSS concentration of 2,000 mg/L was exposed to 300 mg/L of acetate COD. The active biomass concentration was determined from kinetic modeling to be 320 mg/L so that the VSS in the test culture was 16 % active acetate-utilizing microorganisms. 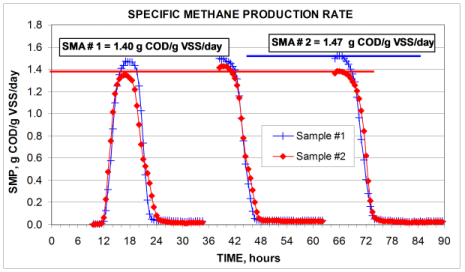 In anaerobic tests, the active biomass is indicated by the maximum specific methane production (SMP) rate in the presence of high concentrations of acetic acid, ethanol or other organic substrates.